I watched the coverage of former FBI Director James Comey after he was fired by President Trump. He was in Los Angeles, scheduled to give a speech that evening. He cancelled the event and flew back to DC. 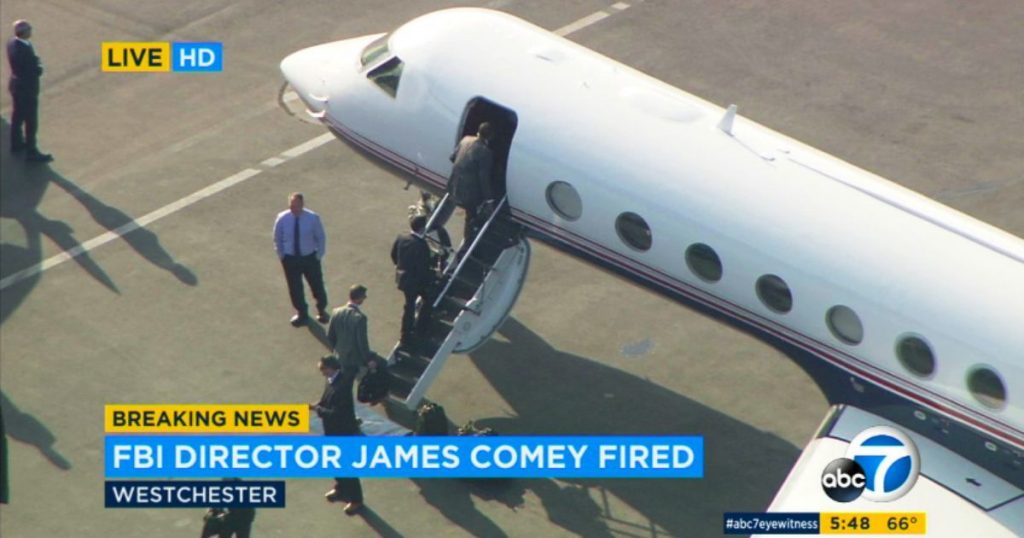 Director Comey has a federal salary of $172,100 according to a report by CNN. That’s a pretty good wage but to me it seems low for the guy who the top dog in law enforcement.  But wait, there are some good fringe benefits with the job.

Here’s where the Waste and Abuse comes about. As I watched his departure from LAX he was boarding a private jet. I looked up the tail numbers of the plane and the FAA lists the plane as a Gulfstream G550.

I guess I’d be pissed off if I lost that bennie from my job!

Back when dinosaurs ruled the Earth and I was an elementary school student, we were taught that the US was the “great melting pot” of cultures. Immigrants, including my grandparents, came to this country and knitted together the fabric of society, culturally, religiously, and intellectually. We had the notion that the total was greater than the sum of the parts because of melding of thoughts and cultures.

Looks like the LIBTARDs (Liberal Retards, and I know that’s an insult to retards across the world) believe that there should be NO blending and learning among cultures and that we should remain strictly divided by our ethnic heritage. You can see this NEW THINK in their IDENTITY POLITICS that they profess as part of their PROGRE-SISSY agenda.

Here’s a great example. A couple of WHITE girls went down to Baja California, Mexico to try and figure out how the locals made their flaky tortillas for burritos. They got some basic clues as to the recipe and techniques and then worked out BY THEMSELVES how to replicate the tortillas. Hey let me give you a little secret and I’m not a chef nor Mexican.  Cold lard cut into the masa (corn meal base of a tortilla).  But back to the event.  The young ladies opened up a “pop up” store in their home town of Portland OR to sell their burritos made with the flaky tortillas. They were successfully  operating their business for several months.  A positive review was written about their business.

Now you would think that the media would pick up on the positive review and celebrate a couple of food entrepreneurs making some tasty dishes, but no, quite the opposite. A Portland newspaper slammed them as RACISTS for culturally appropriating another ethnic groups “traditions and cultures” when the WHITE girls started cooking their own version of MEXICAN styled food.

Then power of social media raised its ugly head to defend the great injustice. There became such a backlash by the protectors of all things ethnic against these two alleged RACISTS on all forms of social media, that they had to close down their business.

Here’s the LIBTARD logic, if you can call it logic. ONLY persons of a the correct ethnicity can offer for sale items that might be based on LIBTARD defined ethnic origin. Since the girls were of WHITE PRIVILEGE they are banned from selling food that was based on another culture’s cuisine.

Hey LIBTARDS, you need to boycott Italian restaurants because they “culturally appropriated” the tomato which originated in Peruvian cuisine.

I’m waiting for the obvious next logical step.  Unless you are of the correct ethnicity, you will not be allowed to eat food based on another culture’s cuisine.  You might enjoy it, thus “culturally appropriating” the desire to eat food other than those of your LIBTARD defined ethnicity.

Makes perfect sense, does it NOT?

Wealth Has Its Privileges…

Okay, before I write more, you can go ahead and call me a hypocrite as I’ve taken advantage of what I’m about to write about.

There is are a couple of things that bug me when I take an airline trip.  Well, more than a couple, but I’ll limit it to just these two for now…

One of the issues that I have is with the TSA security procedures, specifically the TWO lines to get through the screening process. One line is for FIRST CLASS and PLATINUM LEVEL travelers. The other line is for the rest up us great unwashed. Ever wondered why there are the two lines?

When I had a FIRST CLASS ticket one time, I asked the TSA officer why they allowed me to cut to the head of the line. He explained to me that part of the cost of my FIRST CLASS ticket was a fee (bribe/graft) paid to the TSA to “pay for the staff” to allow me to jump ahead of the people waiting in line.  Now that’s a crock o’ smelly stuff because I have never seen extra staff processing FIRST CLASS passengers.  They just allow the UPPER CLASS to step in front of the LOWER CLASS in the queue.

Whoa there!!! TSA screenings are a GOVERNMENT MANDATED process that applies to EVERYONE.  According to TSA policies, people of wealth and means are allowed privilege in the screening process.  Is this not PAY to PLAY?  If you have the MEANS to buy a FIRST CLASS ticket, you can step right in front of the LOWER CLASS.  Shouldn’t everyone be mandated to follow the same procedures?  Shouldn’t there be equal treatment under the law?

The other place where I benefited from PAY to PLAY with government services was with Hillybob’s old agency, the United States Department of State.  I needed to make an overseas trip for the company I was working for and I didn’t have a passport.  Well it turns out that a “fee” can be paid to the passport agency of the Department of State in order to expedite the passport process.  My company paid the fee and I had a passport within just a few days, rather than the several weeks it would have taken  if I had used normal processing.  Once again, if you have MEANS you can jump ahead of the crowd when it comes to government services.

George Orwell was correct in his book “Animal Farm”.