Let’s look at what the Australian Buyback achieved.

If weapons were outlawed and collected in 1996 we should immediately see a reduction in homicides by firearms in 1997.  Right? 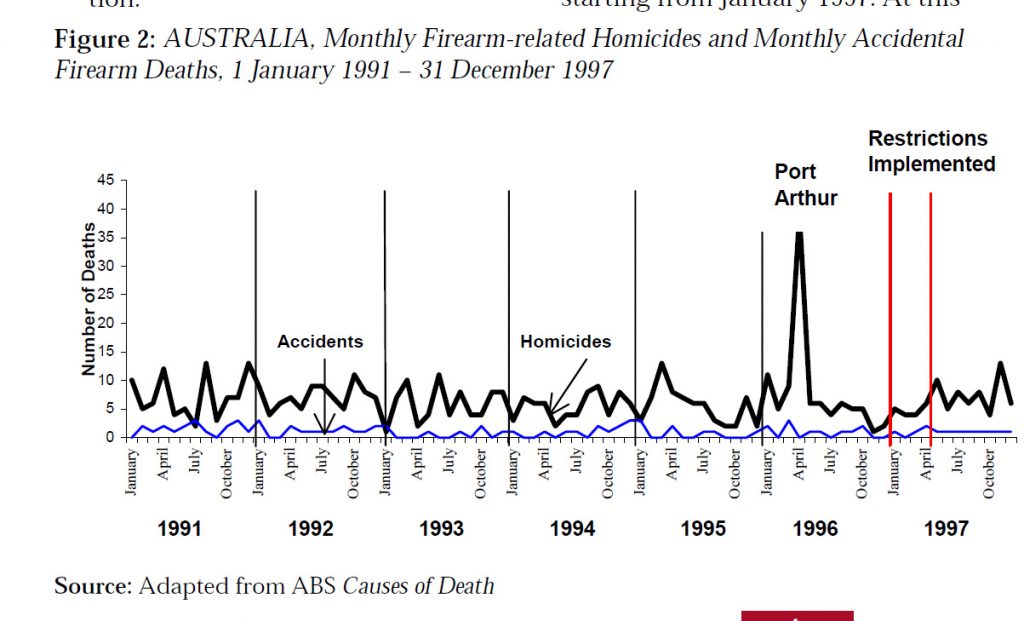 As you can see firearms homicide rate didn’t change in 1997 after the restrictions went into effect.  The big spike labeled “Port Arthur” is the event in Tasmania which spurred the “buyback”.   The authors of the study conclude, “The graph suggests that the Port Arthur Incident was an isolated event with no impact on the longterm behaviour of firearm-related homicide“.  Hmmmm?  I imagine you feel much safer with the FACT that firearms homicides went, well unchanged.  The authors go on to say that firearm homicides showed a “weak downward trend” PRIOR to the “buyback”  Further they say, “This raises the issue as to whether more recent behaviour is part of a longterm cycle rather than being the result of short-term influences“.  In simpler terms,

Let’s put this in a broader perspective.  What effect did taking away guns do to homicide rate in general? 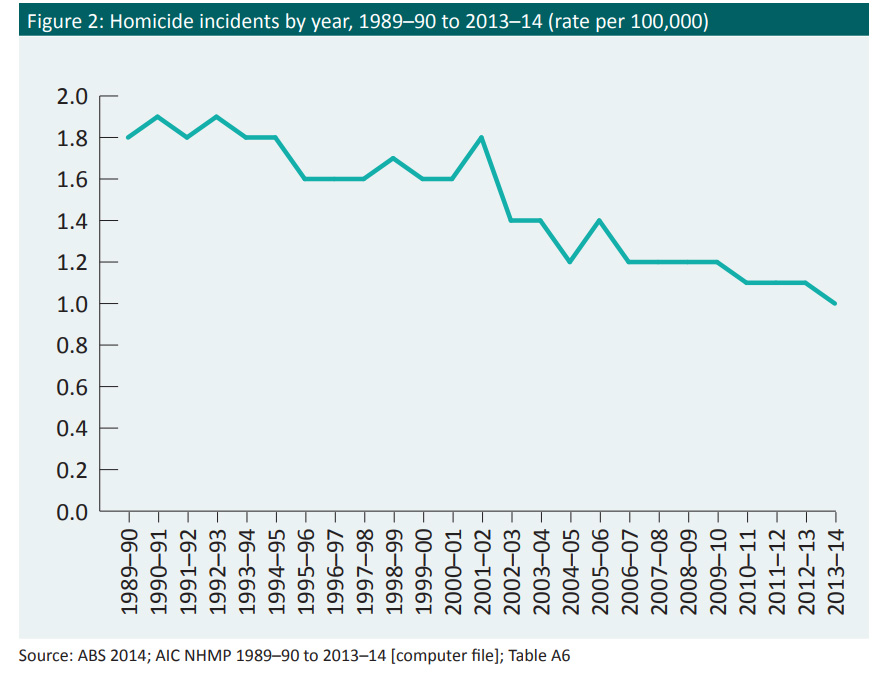 Do you see a large reduction in 1997?  The overall homicide rate was  unchanged immediately after the ban, as expected.  Four years after the “buyback”, in 2001, there was a huge uptick in homicides.  Feel safer now?  The graph indicates that there has been a downward trend in homicides both before and after the ban, which means that there is NO CONCLUSIVE correlation between the homicide rate and the gun buyback.  As in the US, there are more homicides with knives than with firearms.  There are also more homicides by bludgeoning than with the use of firearms.  Always has been the case.

The suicide rate is has shown a steady increase in the past 10 years. There are news headlines that suicides were at their highest rate. And what happened right after the “buyback” to the suicide rate?

There was a slight decline in firearms related suicides, BUT overall suicides SIGNIFICANTLY INCREASED.   Firearm suicides, just like homicides, were on a downward trend prior to the “buyback”, while the overall rate was increasing.  Tell me again how lives were saved by the “buyback”?

The researchers behind the data seem reluctant to explain what happened.  The report waffles and says, “… there may be evidence
of substitution in means used to commit suicide“.  WTF?  “There MAY be evidence”?  That deserves a “No shit, Sherlock“.  Increasing of deaths by other means is ignored because it doesn’t fit the “good news” narrative of the effect of banning firearms.  Once more, how many lives have been saved?

And yet more data

The liberal left touts that Australia hasn’t had a “mass shooting” since the great confiscation.  That’s actually not true. There were at least 4 that I can find since the ban.  What if we look at “mass homicides” after the ban?  The numbers stay ugly.  We have all sorts of mass homicides.  Killing by knives, bludgeonings with blunt objects, and a new form, mass homicide by arson.  There were many “mass homicides” by burning down buildings with occupants inside, post “buyback”.  And then we have the terrorist who drove a vehicle into a mall last year killing 6 and injuring more than 30 others.  All this after the “buyback”.  Feel safer when you can’t fight back?

The unfortunate reality is that “Common sense” in liberal-speak means, “Ignore the FACTS”.

The following were used as reference for this entry.  You can click on the links if you want to read them for yourself.

tandi116  No. 116, “Firearm-related Violence: The Impact of the Nationwide Agreement on Firearms”, Jenny Mouzos; Australia Institute of Criminology

Here is yet another reason I despise the trickery of the Left.

They have coined the term “Common Sense (fill in the blank)“. Right now they are screaming that “everyone” wants “common sense gun control“. Disagree and you are not part of the “everyone”.  If you are opposed to their agenda, obviously you lack “common sense” and are summarily dismissed as just another screwball who is “bitter and clings to guns and religion“, as noted by Senator Barack Obama in 2008. That all said, what exactly is “common sense”?

Well banning weapons that are SCARY LOOKING is obviously “common sense”. The other “common sense” measure bandied about is a “Voluntary”  Australian-like buyback program. Hillybob said during her FAILED campaign that “we” need to seriously look at an Australian buyback program.  Of course we will all line up to “voluntarily” hand over all of our firearms, Second Amendment be damned.

Once again let’s roll the tape and see just what such a measure would accomplish. BE FOREWARNED, the Commies will never give you these FACTS.

In 1996 and 2003 the Australian government instituted a “National Firearms Buyback Program” where they compensated people to turn in, under force of law, their firearms. The program was MANDATORY because they changed their firearms ownership laws, just like they want to do here. To be clear, this was not a “voluntary” program.  They didn’t say “Come on down, mate and we’ll give you some money for the firearms that you don’t want anymore”.  It was give us your guns, take the money, and be happy we didn’t lock you up.

“MILITARY STYLE” weapons were a class of banned firearms. They also outlawed all long guns, most rimfire rifles, most semiautomatic weapons, pump shotguns, most handguns including revolvers, and a host of other types. The buyback program cost the Australian taxpayer about $800.00 per gun confiscated in 1997. Let’s do the numbers, folks.  With inflation you’re talking almost double that amount in today’s dollars. The Washington Post keeps saying there are 357,000,000 guns in the US. When we update the $800.00 for the cost of inflation we will need to payout $1251.00 per gun to confiscate them. That would be almost HALF A TRILLION DOLLARS to buy them back.

You can read one of my previous post HERE and you’ll see that’s about what we allocate for all of MEDICAID.  So we just need another Medicaid sized debt expenditure.

HALF A TRILLION DOLLARS is peanuts, for those commie who have corned the market on all “common sense“.   All the devoted Pelosi-ites, Schumerites, Bernites, and Hillybobites hated the “crumbs” tax cuts.  Just raise taxes.  All American love to pay more taxes for good “progressive” causes.  Think of the children.  Makes “common sense” to me.

But that’s not what I came here to write about. I will present a few more facts, tomorrow, about the “Australian Buyback” and how it makes such wonderful LIBERAL “common sense”, if there is such a thing.

Today the kids are out marching about to try to destroy your Constitutional rights. And not just your Second Amendment rights.

But once again lets roll the tape.

Lots of people must be killed by those evil weapons of war, right?

According to the FBI, there were 374 deaths by “rifle” in 2016 which includes all types of rifles, not just the evil black ones. So hunting rifles, .22 plinking rifles, muzzle loaders are all part of the 374. Shotguns are MORE deadly, than “assault weapons” with 262 homicides by those evil duck guns.  If you want to ban evil black guns, shotguns should also be banned.

And what do you think is the THIRD leading cause of death in the United States?

According to Johns Hopkins Medicine, DOCTORS are the THIRD leading cause of death in the UNITED STATES, at over 250,000 people EVERY YEAR.  The study goes on to say that the numbers may be underreported and that there should be a better means of tracking patient death by DOCTORS.  Wouldn’t this be a better cause to demand action on?  As far as I know, no one has undertaken any measures to look at this problem, much less actually do something to reduce the number of deaths.  Basically no one cares because it doesn’t seem as frightening as an evil black gun.

You would need to have almost 15,000 Parkland sized school shootings every year to equal the number of deaths caused by doctors.  For perspective, you would need MORE than EVERY OTHER high schools to have a shooting with 17 deaths EVERY YEAR to achieve the same number of annual deaths by doctors.

Now tell me again how much safer we will be after we ban evil black guns.