“… AI (Artificial Intelligence) could be the worst event in the history of our civilization“, Stephen Hawking.

Hawkings speculated that computers can emulate the human brain and could potentially bring new solutions to global problems. Cancer treatments, pollution control, increased production, more efficient farming, weather prediction, and a host of other benefits. But Hawkings warns that if unchecked and unregulated AI can also be used for nefarious purposes. “It brings dangers, like powerful autonomous weapons, or new ways for the few to oppress the many.”

The Overlords at Google are spending big on developing Artificial Intelligence. They were early on funded by the US Department of Defense, The purpose was to help sort through all the intelligence data collected worldwide to help the military in their constant battle against evil forces. Here’s where it gets weird.

The employees at Google had a hissy fit and protested to Google management, that they didn’t want their work to be used by the United States DoD, even though we tax payers paid for the products they developed. In conjunction with this protest of the United States gaining benefits from Google AI, Google, invested BILLION$ of dollars into an AI campus in, take a guess, China! Now China doesn’t allow businesses to exist in that country unless the Chinese government has access to the technology. So in effect, Google WON’T help the United States defense but they WILL happily HELP THE CHINESE government and in turn the CHINESE MILITARY.

Here’s another THREAT that is UNNOTICED as we spend all of our time and energy worrying about Russia. I believe that the Chinese PLAN to dominate the United States without firing a single shot. The Chinese plan to dominate the WORLD’S economy and stranglehold ALL COUNTRIES. AI has the potential to give the Chinese exactly what they desire. How? Right now the BIG MONEY is in owning the “Crystal Ball” that allows you to dominate in trading, whether it be in equities, commodities, or currency. Whoever owns the market OWNS THE WORLD.  Sounds like an evil Bond villain, but this boogie man is REAL.

Here’s an example of said “Crystal Ball“. Hillybob Clinton took $1000 in 1979 and in 10 months amassed $100,000 trading in cattle futures. Analysts say that the odds of such a gain by a novice trader would be 1 in 31,000,000,000,000. That’s one heck of a “Crystal Ball“. Okay Hillybob’s “Crystal ball” was most likely “insider information”. Now if the Chinese can figure out how to use AI to tap into “insider information” or figure out trends with certainty, they will use their “AI Crystal ball” to win the WORLD ECONOMIC LOTTO in a grand scale. If the Chinese can consistently beat 31 TRILLION to 1 odds using AI, they would end up controlling all of the WORLD’S FINANCIAL MARKETS.

Europe is talking about regulating AI, but do you think that the SECOND LARGEST ECONOMY IN THE WORLD gives a crap what the Europeans regulate?

While the FAKE NEWS media is screaming “Russia, Russia, Russia!”, I believe that the Chinese are quietly working on taking over the WORLD by controlling all the money.

As expected the mainstream “fake” news media blew up in indignation. “Racist“, “White supremecist“, “Alt right“, “Ignorant“, and the litany of hysterical comments goes on.  They scoffed at President Trump.  Of course he’s wrong.  Former President Obama just a few months ago was in South Africa praising the people and government on the great things that they are doing in their country.

“So, young people, who are in the audience, who are listening, my message to you is simple, keep believing, keep marching, keep building, keep raising your voice. Every generation has the opportunity to remake the world. Mandela said, “Young people are capable, when aroused, of bringing down the towers of oppression and raising the banners of freedom.” Now is a good time to be aroused. Now is a good time to be fired up”, President Obama.

I saw this headline on Yahoo news, “S.African farmers ‘furious’ over Trump land reform tweet“. Could President Trump be wrong about the farmland situation in South Africa?

Reading the story beyond the headline shows that the “furious farmers” interviewed are interestingly all black farmers. They are NOT the farmers whose land might be seized without compensation. It’s the white farmers referred to as Boers who will lose their land and possibly their lives. Do you think the that the “furious farmers” might have a bit of a bias in this issue because they will be the beneficiaries of land seizures?

To be crystal clear this is a racial issue. The South African government is seeking to change their constitution to allow for these uncompensated land seizures. They want this change to speed up their “land reform” plans of taking away white owned farmland and giving it to black South Africans. The government’s underlying philosophy for taking on “land reform” is that they openly state that whites make up only 8% of the population but that they own 72% of the farms, and this disparity is unacceptable.  Uncompensated land seizures, by force if necessary, are justified in their world view.

Neighboring country Zimbabwe a few years ago seized white owned farmland with similar racial equity goals fueling the seizures. What was the result? Were the residents happy with the their new ill gotten gains? Zimbabwe had a growing economy up until they decided on “land reform“. After 2000 when all of the white farmland had been seized and redistributed Zimbabwe slid into financial ruin. The new black farm owners were described as “inept or uninterested” in farming and made some short term gains by selling the farm equipment. In 2008 Zimbabwe had it’s peak period of inflation. That year the country had a mere 231,000,000% inflation rate.  231 MILLION PERCENT!  Currently Zimbabwe has 95% unemployment and is one of the poorest countries in the world. I’d call that a success.

As the saying goes, “History is a great predictor”.  A good time indeed to be fired up.

The typical stereotype when someone says “Asian” is smart, quiet, hardworking, and introverted. I was surprised to hear that in the United Kingdom there are roving ASIAN RAPE GANGS as reported by the press across the pond. They prey on young girls, mostly aged between 12 and 17. They are described as “grooming” gangs who befriend and then rape and sexually abuse the girls to “groom” them for the child sex trafficking business. Very heinous.

Here’s ONE F’ed up part. Take a look at some of the perps involved in these “Asian gangs“. 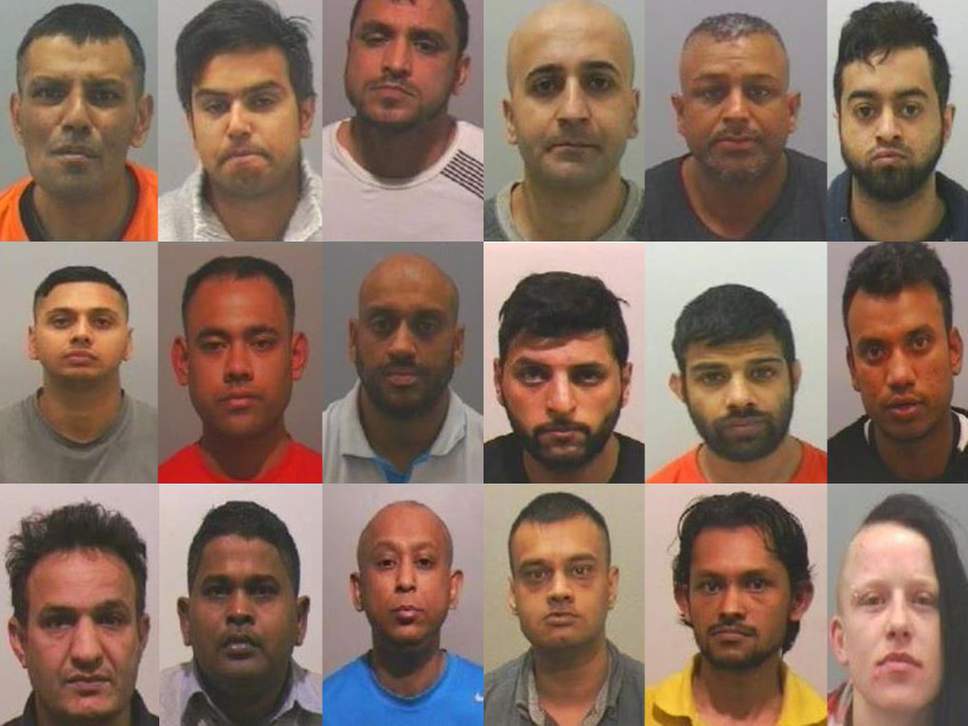 Do they look like your typical Chinese, Japanese, Vietnamese, or Korean math geniuses?

What do they have in common? They are almost ALL MUSLIMS.
The UK press and the leadership DO NOT want to call them MUSLIM RAPE GANG members because they don’t want to offend a protected class. Hence they are Asian rape gang members because most of them are from Pakistan.

Here’s ANOTHER F’ed up part. Anyone ever heard of Tommy Robinson?

Tommy Robinson was imprisoned because he was reporting on the TRIAL and CONVICTION of these Muslim rape gang members. He had the audacity to call them Muslim rape gang members. Mr. Robinson was at first arrested, tried, and released on probation for his reporting. He was ordered by the court to stop reporting on “Muslim” gangs.  He “violated” his probation by standing on a public sidewalk outside the courtroom as he live streamed the perps entering the building. Here’s an example of the efficiency of the UK legal system when they have it in for someone. Robinson was ARRESTED for the probation violation, TRIED for contempt of court, CONVICTED, SENTENCED, and IMPRISONED in LESS THAN FIVE HOURS! Talk about a speedy trial.

And here’s a THIRD F’ed up part. Robinson was assigned to a prison with a large Muslim population. UK officials had no concern for his safety after his conviction for “violating the rules of free speech”.  He was beaten while in prison.  Feces were constantly thrown into his cell by passing inmates.

And here’s a FOURTH F’ed up part. The UK press was requested NOT to cover the Tommy Robinson case and the press COMPLIED. If it wasn’t for local activists and international commentators, the story would have had no coverage in the UK or anywhere else in the world.  The mainstream media here in the US did not cover this story either.

Anyone else wonder where things are headed?