I own an electric vehicle. Call me Mr. Environmental Sucker. Here’s the issue.

The battery in my Nissan Leaf is going “Tango Uniform” as the folks in the military say. The car was originally touted as having a 100 mile range. Right now I’m limping around with about 50 miles of range and it’s still decreasing as time goes on. The simple solution should be, replace the battery. Here’s the problem.

Car companies would rather sell you a new vehicle instead of extending the life of an older model. What Nissan has been doing is raising the price of a replacement battery to make fixing the car unaffordable. According to kbb.com the car has a private party value of $5000. The trade-in value is half of that, around $2,700. How much is a new identical replacement battery from Nissan? About $10,000!

At this point, I’m not sure if spending more money on the electric car is worth it. On top of the repair costs, here in the People’s Republik of Kalifornia, the electric company has raised the rate of electricity. At peak times the charge is about $0.58 per kilowatt-hour. Compare that to the national average of about $0.12 per kilowatt-hour. If the battery were 100% efficient in charging (which it isn’t) and I was able to get the full 100 miles per charge (which I can’t) it would cost $14 to drive the 100 miles, best case. With gas at about $3.00 per gallon, the equivalent “gas mileage” is 21 miles per gallon. An equivalent sized gas car gets 30 or more miles per gallon, which means the gasser is 50% more cost effective to drive.  My bigazz, four-wheel drive, diesel pickup averages better than 25 miles per gallon beating the electric car on cost effectiveness.

Given all that, I have no idea what I’m going to to with my electric car.  Anyone want an electric vehicle?  I have a “Green New Deal” for you.

As an owner of an electric vehicle, “Going Green” means that “Green is Going out of my wallet“.

Pfizer has announced that they will have 1.3 BILLION doses of their China virus vaccine distributed in 2021. Why has the Alexandria ‘Occasional Cortex‘ crowd NOT been screaming bloody murder about this?  Why not a peep from Al ‘I created the Internet’ Gore?  Where’s John ‘Swift boat’ Kerry?

The vaccine needs to be shipped and stored at -70 degrees Celsius. This requires a special freezer that some sources say will cost $20,000.00. Pfizer and the CDC are recommending NOT to buy these specialized freezers. Instead they are recommending a cold storage box that is continually refreshed with cheaply available ‘DRY ICE‘.

What is DRY ICE? It’s Carbon Dioxide (CO2) in a solid form. DRY ICE has a surface temperature of about -109 degrees Celsius and turns into a gas (a process known as sublimation, that is it goes from solid to gas without melting to a liquid) at about -78 degrees Celsius. It’s never a liquid hence the term DRY ICE.  Perfect for storing the new vaccine.

The 1.3 BILLION doses will most likely need several POUNDS of DRY ICE to ship and store the vaccine.  The DRY ICE (remember it’s CARBON DIOXIDE, CO2) will eventually turn to gas and go, oops, into the atmosphere. BILLIONS of pounds of CO2 will end up in the atmosphere and CO2 is the GREEN HOUSE GAS that causes the “EXISTENSIAL THREAT” to the world according to the Occasional Cortex crowd and all the other alarmists.

Let’s randomly pick a modern country, say SWEDEN.  They put out about 26 BILLION pounds of CO2 annually.  If it takes 10 pound of DRY ICE to store a dose of vaccine over the whole distribution process, that would be 13 BILLION pounds of CO2 or HALF of the ANNUAL CO2 emission of the COUNTRY OF SWEDEN.

Save the people, kill the world?

A new BAN on plastic materials has been mandated by the Canadian government. 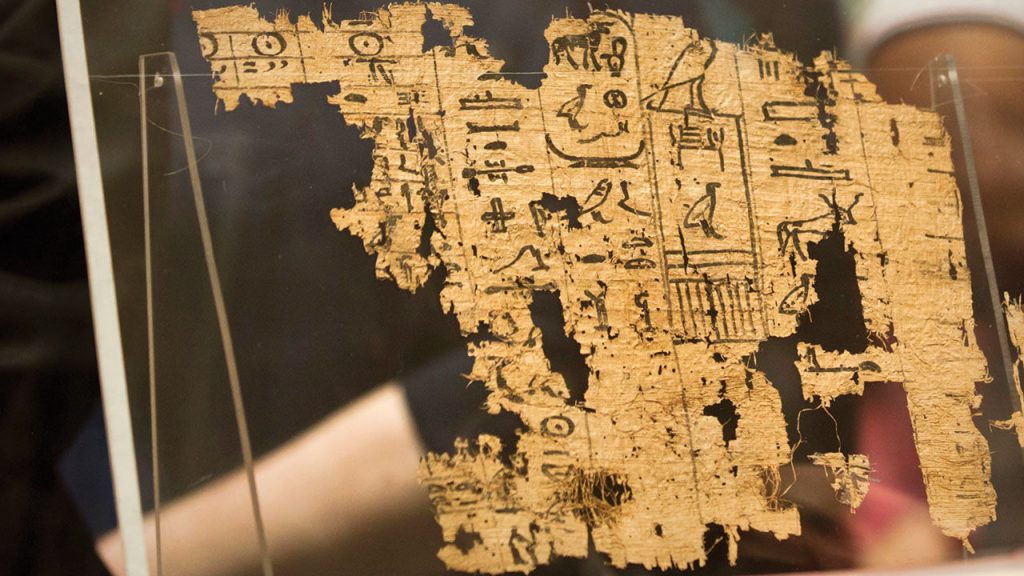 This is a picture of the oldest known papyri. It is made from pressed papyrus reeds which grow naturally in Egypt. It is the earliest form of PAPER. This fragment is OVER 4500 YEARS OLD! I’d say that it is in remarkable condition and the writing is clearly legible.

What does this have to do with the Canadian plastic ban?

Canada is banning single use plastic items. The reason is to force people not to use NON or DIFFICULT TO RECYCLE products. I suspect most of this ban is because CHINA doesn’t want Canada’s plastic garbage, especially single use plastic grocery bags. The idea is to force people to use items made from other materials. Many of the replacement items will be made from, wait for it, PAPER.

Paper products are “believed” to be bio-degradable and therefore good for the environment. However as you can see, paper can remain in great condition for thousands of years.

I wonder if the Canadians have figured out what they are going to do with the mountains of paper products for the next FEW THOUSAND YEARS?