President Obama in the waning days of his presidency appears to be attempting to cement his legacy, getting revenge on those who have opposed him, and also hindering the incoming administration.

He’s stabbed our best ally in the Middle East, pardoned hundreds of felons, imposed sanctions on Russia, and just did one of the biggest Federal land grabs. He also seems poised to release all the bad guys from Gitmo, to fulfill his campaign promise from eight years ago.

Some of President Obama’s actions seem to be personal. Stabbing Israel appears to be a product of his strained relationship with the Israeli Prime Minister. The land grab in Utah looks like a “middle finger” to Senator Chaffetz of Utah, who led the investigation into Hilllybob’s email server.  Senator Chaffetz said that he was given ONLY 50 MINUTES notice that President Obama was going to grab over 100 MILLION acres of land away from the State of Utah and put it under federal control.

President Obama can still give this country one last “middle finger” on his way out the door.

There is one small hole which he COULD drive a truck through to stack The Supreme Court with a liberal justice.

The Senate Democrats could call for a vote on Merrick Garland, whom President Obama has already proffered as his pick for The Supreme Court.  They might be able to garner the votes to approve his nomination and there you go, a liberal leaning Supreme Court.

A Supreme Court justice selection is not something that Congress or President-elect Trump can ever undo.  This could be the gift that keeps on giving for generations to come.

Looks like we need to wait until after January 3, 2017 to see if President Obama drops one big smelly new year’s parting gift on our country.

I just watched short timer Secretary of State John “Swift boat hero” Kerry blathering for an hour on why the United States took the Chicken-doo-doo stance of abstaining on the U.N. vote to condemn Israel’s settlements. To me, if “our” country is FOR condemning Israeli settlements, then the U.S. ambassador to the U.N. should have been instructed to vote “YES” in favor of the resolution. The passive aggressive “ABSTAIN” vote is still a YES vote, but the administration can say they didn’t vote “for” it, which is total bovine excrement. 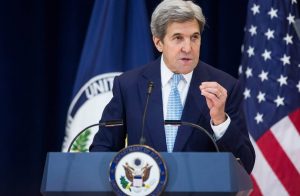 During the speech SOMETHING BOTHERED ME to no end and it wasn’t just his blathering.  Take a close look at the picture above.

Okay, what was annoying was the PLACEMENT of the FLAGS behind the podium that John “toss my medals” Kerry was standing behind. They placed the “Department of State” flag to the “medal tosser’s” right  side and the United States flag to his left (on the right from the viewer’s point of view). That is AGAINST the LAW (Title 4, Chapter 1, Section 7, paragraph k, of the United States Code) which states that The United States Flag MUST ALWAYS be displayed to the speaker’s RIGHT (left side of the stage from the viewer’s point of view).

Here’s the governing paragraph of the United States Code.

The way they were displayed INDICATES that the “Department of State” has a SUPERIOR higher authority than the United States of America!

With all of the “qualified” staff and lawyers, why couldn’t they display OUR FLAG in the lawfully correct and respectful manner? I learned about the flag in The Boy Scouts of America and in elementary school, back when kids were taught to have pride and respect our country. We were not taught to take a knee.

I believe the placement of the flags was purposely setup by some smart-ass weenie in the State Department to reinforce the notion of the “great power” of the department. Hey they just screwed the only democracy in the Middle East and they didn’t even buy them dinner.

To all of my blog readers,

Wishing you a very Merry Christmas and a blessed New Year!

That includes all of my Russian, Ukrainian, Italian, and loyal Canadian readers too!

Enjoy some time with family, friends, and our Lord and Savior.