Last night, after the US Senate passed the tax reform bill, Rachel “Mad Cow” Maddow, gave her, oh so enlightened analysis of why this bill only makes the rich, richer and sticks it to the middle class. Her piece is titled, “GOP tax bill set to make rich richer at everyone else’s expense”.

As described on the MSNBC website, “Rachel Maddow reports on the extent of income inequality in the U.S. as the largess of the American economy has not trickled down, and shows how the Republican tax bill further enriches the already wealthy at the expense of everyone else.”

Mad Cow displayed a graph which she goes on to explain, shows the “correlation” between growing “income inequality” and economic disaster. Here’s a screen capture of the graph. 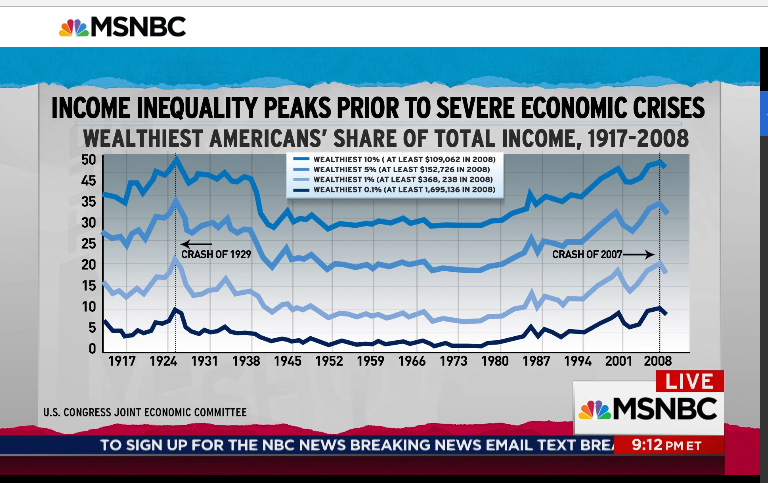 This is the graph taken from the original document.  Click on the chart to read the details. 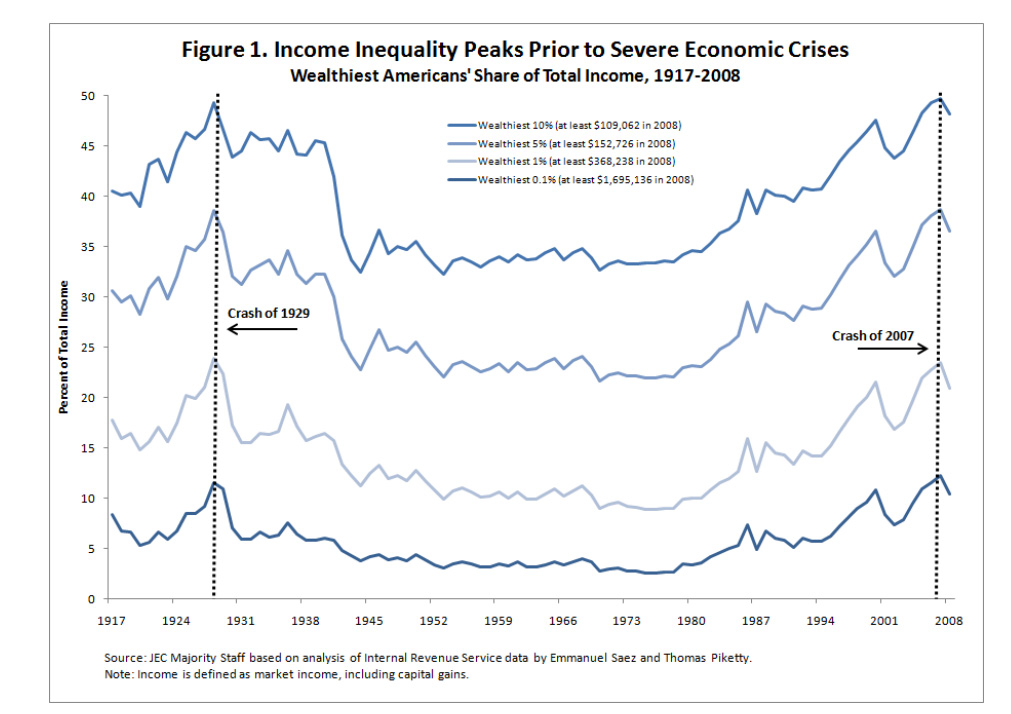 Okay let’s run with this chart for a bit. 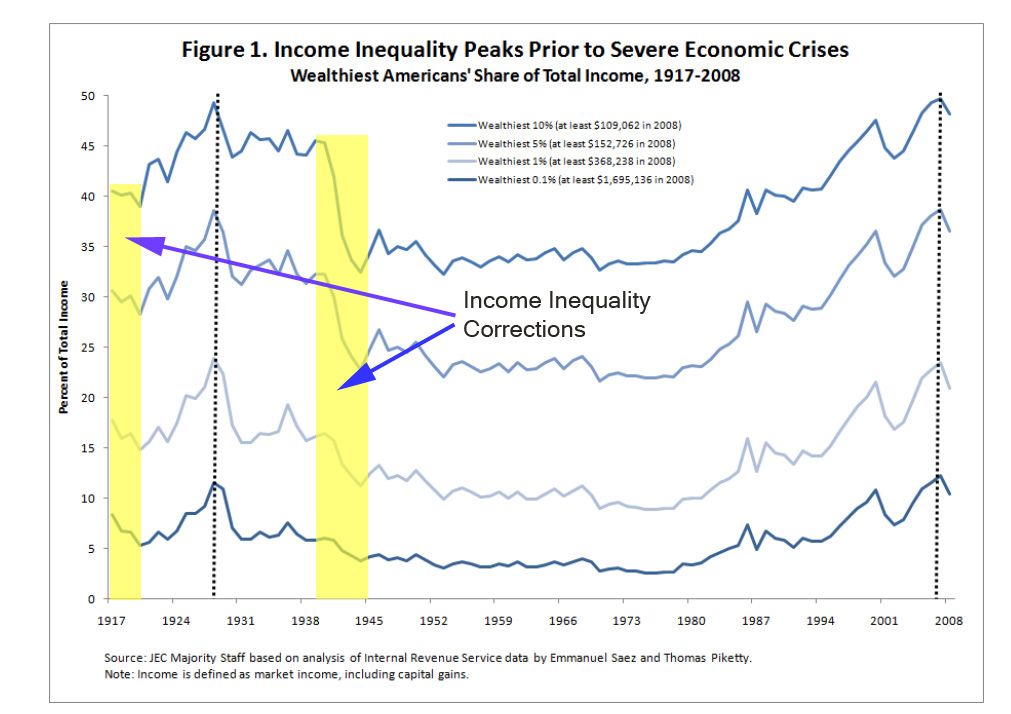 What happened at these two times in history? How about World War I and World War II.

Mad Cow and her ilk, The Bernie-ites, Pocohontites, Hillybobites, and the rest of the progre-sissies scream about income inequality and how they want wealth redistribution.

Looking at the historical data which Mad Cow presented (described by her as part of a bi-partisan study), the obvious solution to income inequality is to have ANOTHER WORLD WAR! All the Wacky LEFT should be encouraging war with the fat little despot, or with some ayatollah, or with the Kremlin. Heck, they’ve been screaming that Russian interference in preventing Hillybob from taking her throne was an ACT of WAR.   I think they need to stop flapping their gums, pick up a weapon, and end income inequality, IF that is what they want.  Tax the hell out of everyone and fuel the war machine, to create wealth redistribution.  The bigger the war the less income inequality.

This is a Safe Space.

PRK Attorney General Xavier “Little Puppetman of the Left” Becerra has filed a suit against the Federal government for “failure to enforce smog standards“. In the usual hackneyed cry of the pussy-nation, Little Puppetman Becerra is screaming out in rage that “People will die!” because President Trump’s agencies are ignoring President Obama’s promises. In the suit, Little Puppetman says,”Lives can be saved if the EPA implements these standards“.

Once again, back the F’ing crazy truck up.

Governor Moonbeam Brown, Little Puppetman, and their lackey legal consultant Eric Holder have all said they will resist President Trump’s decision to exit the Paris Climate Accord. Moonbeam has said the PRK will go it alone to meet all the mandates of the Paris Accord without the blessing of the Federal government. They all feel that they can enforce “world emissions law” but oddly, for some unknown reason, they do not feel that they can enforce US smog laws here in the PRK, on their own.

As some background, the Clean Air Act that Moonbeam, Little Puppetman, et al are suing the Federal government over, has to do with near ground ozone levels. They imply that this also has to do with automotive emissions standards.

Here’s more background information. The PRK has in the past mandated stricter automotive emissions standards than the Federal government (without suing the Federal government). A consumer had to pay a higher price for a motor vehicle in the PRK in order to pay for the extra emissions control equipment to meet the stricter requirements. You could not buy a new car in another state and register it in the PRK.  Of course the vehicles in the PRK were not only more expensive but also lower in performance.  Today, the manufacturers have made the decision to produce cars that are “50-state compliant” avoiding the confusion of PRK laws.  The PRK forced the rest of the nation to pay for the additional emissions equipment, whether they wanted it or not.  Quite fair to the other 49 states.

And some more background. Local PRK governments, cities and counties, have long implemented their own smog laws. Los Angeles, for example, put evaporative containment regulations on gas pumps long before any other city in the PRK or any other state in the nation required them. In the PRK a simple gas can needs to have a “no spill”, positive shut off valve on the nozzle.  These are referred to as California Air Resources Board or CARB compliant containers. The nozzles are a pain to use and more gas is spilled because everyone tries to bypass the function or just replaces it with a non-compliant hose.  It’s an infraction to not have a compliant nozzle on your gas can, but I have never seen anyone enforce the law.  That all said, the cities, counties, or state didn’t need to sue the Federal government to take the actions.

What does all this background information mean? It means the PRK can do whatever it wants to (and has in the past) regarding smog regulations.

What does the law suit actually mean? Can you say SHOWBOATING?  It’s just another way for the pussies of the PRK to give the middle-finger to President Trump.

Don’t get me started on the FACT that the PRK is suing to have Federal EPA RULES enforced, BUT ON THEIR OWN created a pussy-nation sanctuary state as a defiant refusal to comply with Federal immigration LAW.