I happen to live behind the former “Orange Curtain” which used to be a conservative district in the People’s Republik of Kalifornia. In 2020 the Dimbulbs in charge GERRYMANDERED my Congressional district to include a large swath of Los Angeles with the plan to flip the seat in the house, which was held by Republican Michelle Steele, to a reliable rubberstamp Dimbulbcrat.

The plan appears to be working.

Dimbulbcrat Katie Porter who bills herself as a defender of “the people” is leading in the vote tally to represent me. As always these Dimbulbs portray themselves as just average Joes and Josephines (though I don’t know her/its pronoun). But what values does Katie the Commie actually hold?

You can get a lot of insight as to a Congressman’s views by observing who they associate with. In government terms, they call their deepest associations as CAUCUSES. What is a CAUCUS?

And who does Katie the Commie CAUCUS with? That would be the CONGRESSIONAL PROGRESSIVE CAUCUS. She doesn’t just associate with the Progressives, she is the SECOND HIGHEST RANKING MEMBER of the CAUCUS. She is the “Deputy Chair” of the group of commies in Congress.

Who else is in the PROGRESSIVE CAUCUS? How about every member of the self titled “Squad” or Squat as I like to refer them as. Pramila “Fuck Donald Trump and defund the police” Jayapal is the chair, Ilhan Omar is the whip, AOC is a member, and Bernie Sanders the self proclaimed communist is the only senator who CAUCUSES with the loonies.

But wait, it gets even worse.

The Progressive Communists now count over 100 members of the House of Representatives (all Dimbulbcrats near as I can tell) as members of the CAUCUS. Think about that for a minute. Almost HALF of the CONTROLLING PARTY in Congress align themselves with the looniest far left communists. What values do the commies hold near and dear?

They are so enamored and dedicated to these positions that they demanded Joey Biden to take EXECUTIVE ACTIONS to implement their communist utopia into LAW without any need for congressional action.  Case in point, cancelling student loan debt.

You can read their platform HERE.

If the Dimbulbs hold onto Congress we’re in for another hell of a ride for the next two years and perhaps we can all have sideline seats to end of this country as we used to know it.

President Biden has put 8.500 troops on alert, which means they can be deployed immediately, to support NATO troops in a war with Russia over Ukraine. Why are we doing this?

The bottom line is that we are “supposed to” die defending the energy pipelines into Europe, according to the Biden plan. Perhaps the entanglements of the Biden family in Ukraine’s oil and gas industry need protection to keep the money flowing into their bank accounts.

What’s so important about Ukraine? Look at the following map from the Economist. 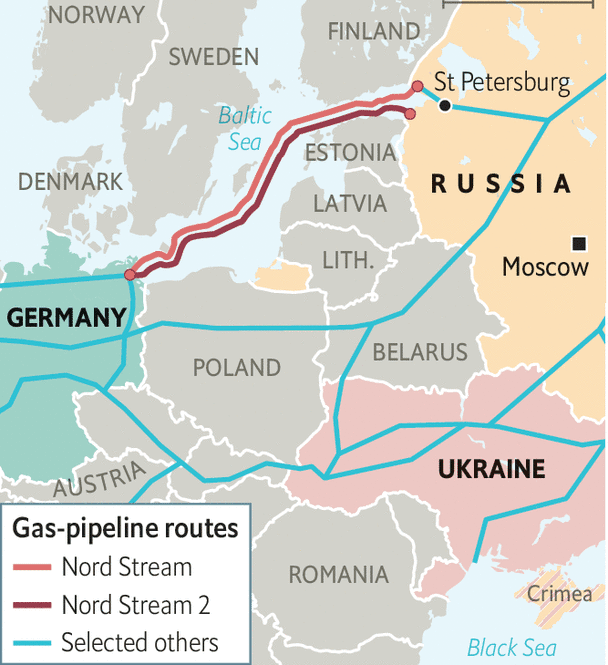 Notice that the bulk of natural gas flows into Europe through the Nord Stream, Nord Stream 2 (soon to be completed), and from Ukraine. If Russia controls Ukraine, they set the price for almost all energy into Europe. Putin owns Europe.

From my understanding, Germany, where the Nord Stream pipelines enters Europe, and Turkey have already made long term “deals” with Russia (Putin) for their energy. Germany is funding the new Nord Stream 2 pipeline from Russia (duh). Turkey buys their air defense systems from Russia.

The energy stranglehold is a European problem. The EU should be organizing an effort to defend Ukraine if they feel the need. Ukraine is not a NATO country and the US has no obligation to defend Ukraine.  There is no need to put American lives in harms way to keep energy prices low in Europe. The problems in Ukraine are of their own making.  Europe was suckered into dependency on Putin when they suckled on the teat of cheap Russian gas.  President Trump offered to sell liquified petroleum gas from the US to Germany in lieu of dependency on Russian gas, but they flatly rejected the offer.  Biden has shut down much of the production of gas in the US, therefore we are no longer in the position to export gas to Europe.  What else has Biden done to exacerbate the problem?  He lifted the sanctions (that President Trump put in place to stop the pipeline) against the financial institutions that were funding the construction of Nord Stream 2.

You’ll hear members of Congress yapping about how we need to defend the democracy in Ukraine. They claim this is our sacred responsibility.  How can we tell that this is a battle of gas and oil and not about democracy? Look at which countries are NOT supporting airstrikes if the Russians were to invade Ukraine. Well golly, Germany and Turkey are not sending their air assets to bolster the defense of Ukraine. Kind of obvious where they stand (or sit by) on a war with Russia.

Spill the blood of young Americans to keep energy cheap in Europe and to fill the coffers of the Biden family.

What she should do to eliminate thousands or even millions of cases of headaches and nausea is for her and the other MORONS on “The Narrow View” to just shut the “F” up.