I keep hearing from the dimbulb presidential candidates that “Global climate warming change” or whatever they want to call it is the biggest threat to our future.  Of course they also say the threat of four more years of President Trump is also the greatest threat to our country.

Additionally they spout off that we are nearly at war with Iran because President Trump pulled out of the Iran deal that guaranteed that the Iranians will be allowed to and will build an atomic bomb withing 10 years.

Part of the Iran deal is to remove economic sanctions and allow Iran to sell unfettered, oil across the world to fund their “peaceful” research into atomic bomb making.

Someone once again needs to ‘splain things to me.

If you are against global warming and desire to rid the world of fossil fuel consumption, why are you encouraging Iran to export oil to the world?

Wouldn’t it be a GREAT opportunity to rid the world of one major source of the substance that CAUSES GLOBAL WARMING?

I guess Iran must have the super secret source of non-global warming crude oil according to dimbulb science.

Tomorrow and Friday will be the CLOWN show affectionately called the The First Dimbulbcrat Presidential Primary Debates.

Here are my predictions of what will happen during the Dimbulbcrat Presidential Primary debates.

1. No one will directly attack Old Zori Joe Biden.

The most honest man in America, the head of the DNC, Tommy Perez will secretly issue orders that no one is allowed to directly attack Old Zori Joe Biden.  They will only be allowed to make vague references to his policies and past but that will be the extent of permissible attack.  Every dimbulb candidate will agree to this restriction.

2. The debate moderator will softball questions to Old Zori Joe.

3. Since there will be 10 people on stage, they will not be all given an opportunity to answer the same question.

This is to allow the moderator to control the direction of the debate to give Old Zori Joe an advantage.

4. If any candidate has too much of an attack on Old Zori Joe, the moderator will switch to another question for the next candidate in line to deflect the attack.

5. The DNC has already picked its winner, Old Zori Joe, so he will come out, according to the media as the winner.

Even if Old Zori Joe fumbles badly, which is a very likely outcome, the fake news media will say that “Old Zori Joe held his own against a very competitive field“.

Joe Biden has been slipping in the polls recently. Since I’m an Asian guy, I have a way to help Old Joe Biden to pick up support from my people.  He should take on a new nickname culturally relevant to Asians.

“Zori” is a Japanese word for a type of sandal. For those of you not familiar with the term “Zori“, here’s a customized picture of my OLD WORN OUT “Zori”, which best represents OLD WORN OUT Zori Joe. 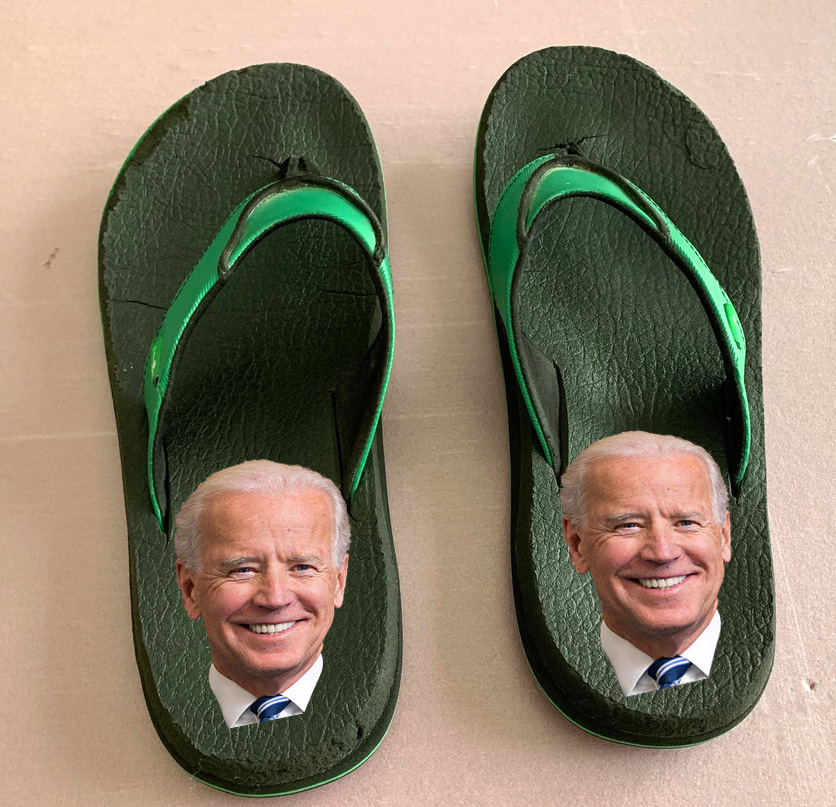 That’s right, you might call them “Flip flops” which is what Old Zori Joe is doing on everything from his lengthy stellar past record that I hear touted by the fake news media.

Anita Hill, The Crime Bill, Hyde Amendment, Hair sniffing, China as a competitor, just to name a few Flip-flops from Old Zori Joe in the past few weeks. At the rate he’s going he’ll have FLIP-FLOPPED on everything in his past, come election day.  Sheesh why doesn’t he just take a stand on what he believes rather than pandering to the whims of every Hollyweird celebrity who whines to him.

Flip-flops are called that because of the sound they make, much like Old Zori Joe.