I saw an interview with the street artist, Sabo, on “Tucker Carlson Tonight”.  Here’s one example of his art, 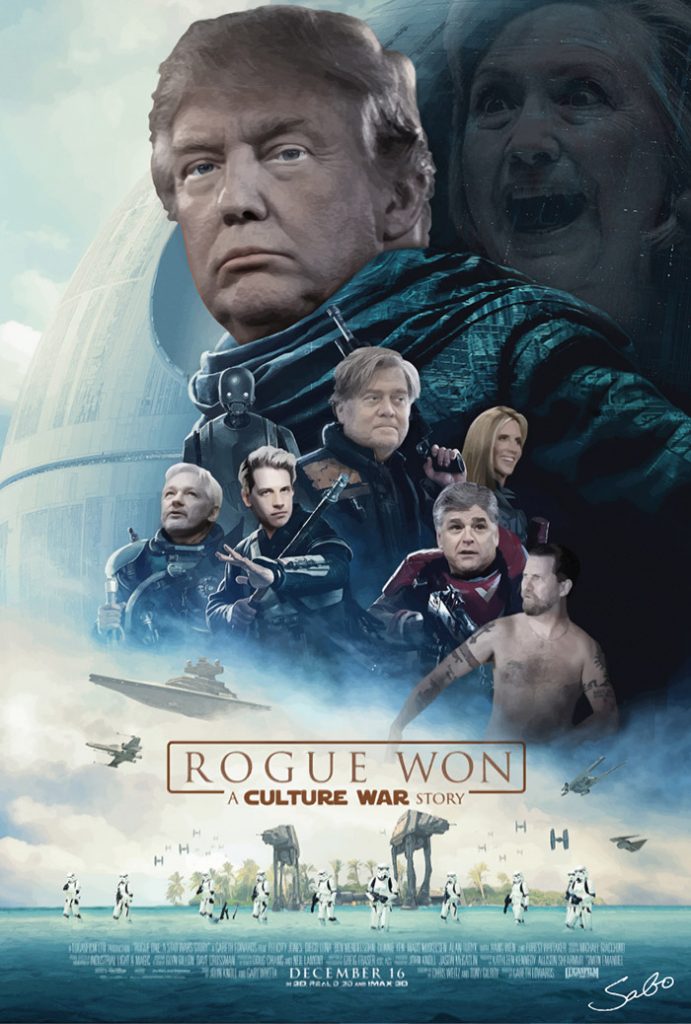 I have to promote this guy. His stuff is in you face hilarious! Probably the ONLY conservative artist in Kalifornia.  He’s been putting up his art across Los Angeles in places you would see movie posters.  Bus stops and benches, shop windows, billboards, Red Box dispensers.  All while the Hollyweird academy awards went on.

The Hollyweird elite met last night for the annual circle jerk, called the Academy Awards, to assuage themselves of their guilt. They patted each other on the backs and lauded how progressive, inclusive, and enlightened a bunch of millionaires can be.  Just to be clear, it really is a circle jerk because the academy members (no pun intended) vote for each other to decide the winners and losers.

Okay, as a deplorable, I have to ask a naive question. why do they have  “actor” and “actress” categories?  If you separate people by gender isn’t that DIVISIVE?  If you only have two categories is that not INCLUSIVE?

These are the “self-proclaimed keepers of morality” who espouse that gender identity is only based upon what gender one feels they are. They say gender is fluid and there are more categories of gender other than just male and female.

I’m calling these hypocrites out. The Hollyweird elite should eliminate these highly SEXIST and TRANSGENDERPHOBIC categories. By their own relativistic moral standards, they are OFFENSIVE!!! They should only have ONE category. “Best Whatever You Identify As Of They Year“.

Heck they should eliminate the “Best” in every category and give trophies to everyone. Someone might not feel included if they don’t win a trophy.

“All in all it’s just another brick in the wall.” From the song, “The Wall” by Pink Floyd

President Trump campaigned on and maintains that there will be “A BIG BEAUTIFUL WALL” between the United States and Mexico.

Personally I’m all for securing the border. Whether it’s a physical wall or an electronic wall, I don’t really care. A country without borders, is not a country.

I keep hearing arguments from the crazy people that a wall is divisive. Well that gets a bid “DUH“. It’s supposed to be. you idiots! It divides the boundary of our country from theirs. Brilliant.

I often hear the late President Reagan quoted by the crazy folks. They use his quote to Gorbachev, “Tear down this wall“. What amazes me is that the loons fail to differentiate the purpose of the Berlin Wall and the wall President Trump has proposed. One wall was to KEEP PEOPLE IN. The other wall is meant to KEEP PEOPLE AND CONTRABAND OUT. I didn’t see people from the Western countries climbing over or tunneling under the Berlin Wall to get to the Eastern nirvana of the communism. I don’t recall hoards of ex-capitalists getting machine gunned down as they cut the concertina wire to become comrades in the Soviet Union.  Hmm, never heard any reports of folks trying to give their ill gotten wealth to Gorby as atonement for living a corrupt Western lifestyle.  Well, today maybe all the “progressives” would try to go over the Berlin Wall if it still existed. They seem to want a communistic society.

I thought the lyrics from the song are apropos, as it seems a the loud mouths on the progressive left and their media cohorts can’t tell the difference between IN and OUT.